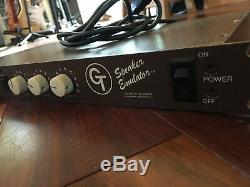 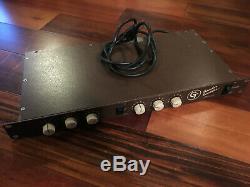 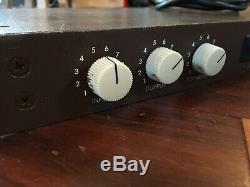 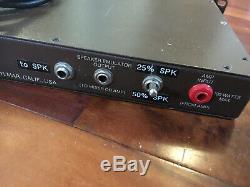 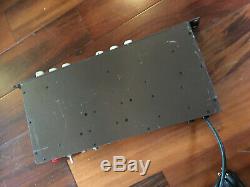 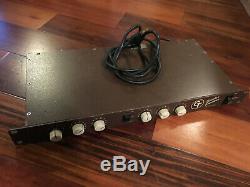 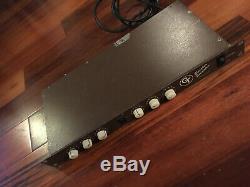 Has 3 band EQ with bypass as well as presence control. Groove Tubes designed this pioneering speaker emulator for the guitar world - they received a patent on it in 1990 and licensed the design to other famous amplifier brands. Many guitarists, a notorously conservative lot leaning to simple controls and copycat tactics, fail to grasp the details and/or market for this device.

Guitar speakers from different brands and indeed different models from the same brand sound different from one another. Groove Tubes, by then having acquired an impressive collection of vintage tube guitar amplifiers, acquiesced that the speaker of choice for guitar amps was the Celestion Alnico G12 which was the stock speaker in early british amps such as Vox, Selmer, and Marshall guitar amps and were often scavenged from inferior "Thomas Organ" Vox solid state amps to be installed in vintage Fender guitar amps for their superior tone. So their design goal for the Speaker Emulator was to emulate the Celestion G12. It is a very different sounding speaker from other later Celestions such as the Vintage 30 or others in the ceramic range used in later configurations so if you are looking to emulate the sound of a cabinet loaded with later speakers you are going to be very disappointed. Because many guitarists do not grasp this important detail, many of them write gear reviews on the'net slamming this device - another reason why I take internet gear reviews with a grain of salt.

As the stock picture suggests, the SE was designed for the vintage enthusiast. The SE is designed to be a 16 ohm speaker load for the speaker output of your tube amplifier and has a power capability maximum of 100 watts. The 16 ohm load was deliberately chosen as a universal load that is safe to use with any amp designed to be used with a 8 or 4 ohm load (although some loss of level will result). The SE is designed as a replacement for the speaker and does not have a "thru" jack for external speakers (a later version called the SE-II includes a THRU jack and was designed for touring systems).

This is a design detail that is missing from purely resistive power attenuators such as the Tom Sholtz Power Soak. The load circuit attenuates the amplifier output by 30dB to the OUTPUT jack to produce a preamp level suitable for direct input to recording systems or monitor systems of higher volume.

If you loved cranking that vintage Marshall Plexi to "Nigel Tufnel" 11 for that tube power amp overdrive but hated the earaches from the volume, the SE is a great solution and keeps you on friendly terms with your neighbors. If you loved the tone of that vintage Tweed Deluxe but can't loud enough to be heard over a stage band, the SE allows you to take the speaker tone and route it to a louder monitor system.

Gain staging has an impact on the clarity of the sound. The INPUT control governs the level of speaker output to the reactive load and will distort unpleasantly if it is too high. For low wattage amplifiers you use high input levels, for high wattage amplifiers you must back the input level down. The OUTPUT control governs the level out of the SE, which should be high for recording systems but may need to be reduced when using with another guitar amp as a monitor.

With proper gain staging of the INPUT and OUTPUT controls you can achieve maximum signal-to-noise ratio with no clipping. The TOP BOOST control restores high frequencies that were attenuated in the reactive load circuit as a necessary evil to avoid parasitic oscillations. Usually this is effective for clean tone, but can get too brassy with flat out overdrive. The EQ section has boost/cut controls at frequencies of 220hz, 1700hz, and 3500hz to simulate resonances of different cabinets - open back versus closed back cabinets have different tone and the EQ is a tool to emulate the cabinet as opposed to the speaker - a nice option when playing back a reamped signal. When played back through a full bandwidth system such as a stage monitor or studio speakers, the EQ also rolls off some high frequencies to more accurately reproduce the constricted bandwidth of a guitar speaker cabinet (the upper limit of a guitar amp tops out around 5Khz).

This is why proper gain staging is important - the EQ will clip harshly if the INPUT control is too high, and noise will increase if too low. If you are using an external guitar amp as a monitor it is advised to bypass the EQ. Other benefits to a studio-friendly output level is you can use the SE signal to drive studio processors like compressors, digital reverb, modulated effects, etc which tend to be wider bandwidth and lower noise than pedal effects units. With pro audio digital reverbs or delays you can easily simulate the room sound which lifts the guitar above the mix without overwhelming the mix.

These were benefits that made the SE a popular tool in the studio and on the road. Curiously my unit neither has a serial number or any badge to hold one.

My original intention of acquiring the SE was to boost the output of my Selmer Twin Thirty. Amplifier being driven by my Fender Rhodes. I love the sound of the Rhodes through the Selmer amp, but the optimum preamp level without distortion resulted in a volume that isn't loud enough in a stage band. I already had the Hughes & Kettner Red Box but that emulates ceramic speakers designed for guitar overdrive, and I wanted to emulate the clean tone of the Celestion G12 Alnicos in the Selmer which is a big part of the tone I was getting. I had read of the SE in an old edition of Aspen Pittman's Tube Amp Book and after studying the patent I decided this was the box I was looking for.

I quickly found one for sale online. It achieved exactly the result I needed - with the SE providing a processed signal designed to emulate the tone of the Celestion G12, I could route it to a louder amplifer and the Rhodes could compete with a stage band. The SE also serves me well with my Vox Valvetronix. Amp which I use with a 2x12 cabinet loaded with Celestion Alnico "blues" G12s, and with my 1958 tweed Fender Harvard.

As the original speakers were alnico Jensens which sounded close to the G12s. Players with amplifiers with higher than 100 watts will have to be cautious and keep their output level of their amp down to avoid damaging the SE. If you damage the device with too much power, you are in for a world of trouble because the reactive power inductors are ENCASED IN EPOXY AND THEREFORE NOT CAPABLE OF REPAIR. The process of dissolving the epoxy will also destroy the encased components, which is a pet peeve of mine that is shared with ARP synthesizers. The patent does not disclose any details on the inductors - Groove Tubes wanted to keep that crucial design detail a trade secret to deter infringing copycats. Be sure to add me to your. The item "Groove Tubes Speaker Emulator 100 Watt Reactive Dummy Load Tube Amp Attenuator" is in sale since Monday, June 1, 2020. This item is in the category "Musical Instruments & Gear\Guitars & Basses\Guitar Amplifiers". The seller is "ilovesmesomestrats" and is located in Portland, Maine. This item can be shipped to United States, Canada, United Kingdom, Denmark, Romania, Slovakia, Bulgaria, Czech republic, Finland, Hungary, Latvia, Lithuania, Malta, Estonia, Australia, Greece, Portugal, Cyprus, Slovenia, Japan, China, Sweden, South Korea, Indonesia, Taiwan, Thailand, Belgium, France, Hong Kong, Ireland, Netherlands, Poland, Spain, Italy, Germany, Austria, Bahamas, Israel, Mexico, New Zealand, Philippines, Singapore, Switzerland, Norway, Saudi arabia, United arab emirates, Qatar, Kuwait, Bahrain, Croatia, Malaysia, Chile, Costa rica, Panama, Trinidad and tobago, Guatemala, Honduras, Jamaica, Aruba, Belize, Dominica, Grenada, Saint kitts and nevis, Turks and caicos islands, Bangladesh, Brunei darussalam, Bolivia, Egypt, French guiana, Guernsey, Gibraltar, Guadeloupe, Iceland, Jersey, Jordan, Cambodia, Liechtenstein, Luxembourg, Monaco, Macao, Martinique, Nicaragua, Pakistan, Paraguay, Uruguay.